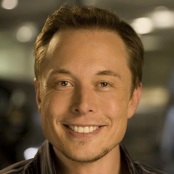 Elon Musk, the noted engineer and businessman behind such ventures as PayPal, Space X and Tesla has come under fire for his Twitter habits. Or should I say, his Twitter non-habits. On October 4th, Motherboard, the technology-oriented part of Vice, published a piece condemning Elon Musk for not following any women on Twitter. Not even his own mother.

At first, you might be convinced that this article is satire of feminist outrage culture gone wild. Unfortunately, however, it is deadly serious. Musk took it seriously enough that he defended himself on Twitter by explaining that while he mostly uses the social media site for news, he follows just as many women as men on Instagram. This was unsatisfactory to many, already intoxicated by their outrage. “So women are okay to look at, huh?”

This is a man who is one of the world’s leaders when it comes to developments with the potential to ensure the future of humanity. His endeavors push forth worthy causes such as clean energy and space colonization in ways that actually make them viable. Yet, here he is, having his time wasted by people with a ridiculous agenda who will never contribute a damn thing to the survival of our species.

Don’t try to win these battles, man. You can’t win. Just keep trying to save the world.